EYES ON THE TERRITORY: journey along the Sangro river 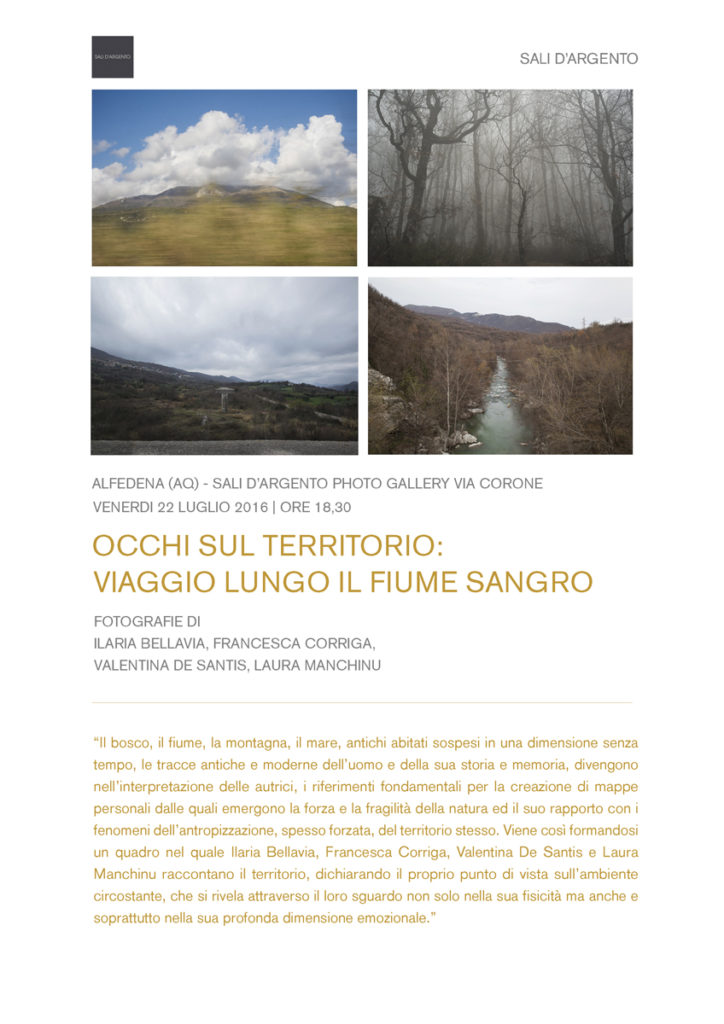 Four young female photographers explore an ideal path from the mountains to the sea, that strating from the slopes of Monte Meta, leads to the Coast of Trabocchi on the Adriatic sea, following the line of the Sangro river through the territory and its modifications.

The forest, the river, the mopuntain, the sea, ancient villages suspended in a timeless dimension, modern and ancient traces of man and his history and memory, become through the eyes of the authors, the key references for creating personal maps from which emerge the strenght and the fragility of nature and its relationship with the human settlements, often forced to the territory itself.

Thus forming a frame in which Ilaria Bellavia, Francesco Corriga, Valentina De Santis and Laura Manchinu tell the territory, stating their points of view on the surrounding environment that reveals through their eyes not only in its physicality but also and above all, in its profound emotional dimension.

Ilaria Bellavia attended the Conservatory G. Bricciardi in Terni, where she graduated in Lyric Chant, her occupation for over ten years. He later developed his passion for photography – tha always accompanied every step of her life, through attending courses and workshops at Istituto Superiore di Fotografia e Comunicazione Integrata – ISFCI of Rome.

Francesca Corriga was born in Sardinia in autumn 1983. Graduated in International relations and Diplomacy with a dissertation concerning the Atomic warhead submarine installation in the Mediterranean Sea during the early 1960s, she has been always particularly interested in environmental issues. She took part in photo exhibitions and awards, among which the personal exhibition “Suspos”, within the A-Banda-Menotrentuno network.

Valentina De Santis (Rome, 1990) graduates in Advertising Graphics at Arts College of via Ripetta in Rome and receives her education on photography at Istituto Superiore di Fotografia e Comunicazione Integrata (ISFCI) di Roma, under the guidante of Dario Coletti, Ottavio Celestino e Angelo Cricchi. With the latter, takes part in a project with the “Train to create” team at UEL university of London. In 2014 she was assigned by Rock Space for a photo repoprtage on Sziget Festival in Budapest. She is currently based in Rome where she work sas freelance photographer for several associations.

Laura Manchinu (Oristano, 1983), is an anthropologist and researcher in the field of Humanities and Visual Anthropology, specialized in documentary photography and audiovisual methods